Hi,
I am considering start using iThoughts as a second step process after gathering the information in MarginNote.

Please could someone who has exported to iThoughts previously tell me how good this export is? E.g., is there any lost of information?, does it mess up the relationships between nodes? etc…

Any tips and tricks are welcome

Hi. I’ve done a few small mindmaps, and it has worked fine. I don’t remember losing any information.

iThoughts is ubiquitous in my paper workflow, it comes just after my MN work and is an export directly from MN. I use it for post-synthesis organisation so I can pre-flight my paper structure. I export from MN with no problems. I’ve learned to structure my MN maps in a way that I know works best for my iThoughts workflow as I don’t like how iThoughts handles notes.

I’ve worked with maps with over a thousand nodes but I usually try to keep them smaller. I work on both iPad and Mac with no significant cloud lag at all. Usually maps and matin note are synced by the time I cross the room.

I use a MN add on that puts my node text into a nodes title. I ensure that any node that is titled is titled how I want it to appear in iThoughts. If a node has a title and text then iThoughts puts the text into notes and I don’t like that. Links all work fine and are prettier in iT than in MN.

Thank you for your help,

I read a thread where someone was having issues exporting from the iPad, while the same mind-map exported with the Mac app was fine.

Have you not experienced this issue?

If a node has a title and text then iThoughts puts the text into notes and I don’t like that. Links all work fine and are prettier in iT than in MN.

Sorry, not sure if I understand this. So, your nodes only have titles in them? (I too use the add on for the titles)
I normally build up nodes by combining different excerpts plus some typed annotations occasionally. Would this approach work?

Hopefully these two images will clarify what I mean about the topics/notes. Found it easier to take these than write it out. If you need further clarification please ask. 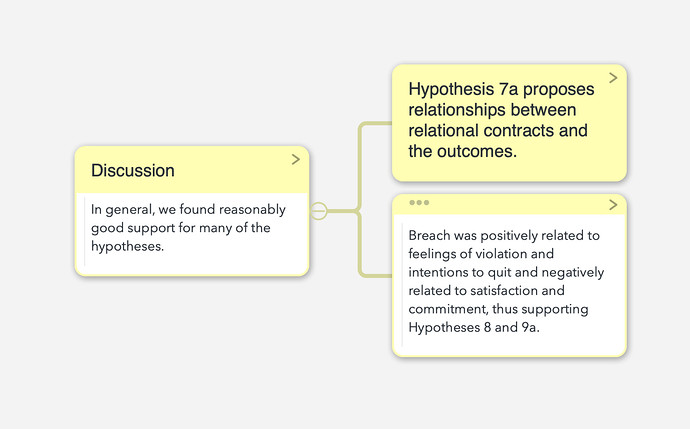 Note the Notes from the Discussion node are only visible when I have the discussion node selected in iThoughts. So, if you have notes AND a title, it puts the notes into a note field. I work around this by having (in MN), title nodes and then children with notes. I think of the iThoughts structure as I’m working in MN.

If you have a specific use case you’d like me to test out in iThoughts I can do so. I have found no differences between iPad and Mac working between iThoughts and MN, even exporting to iThoughts from MN on iPad is fine. Because of a bug in Apple’s file system, on iPad you have to export the mind map into the iThoughts cloud folder as iThoughts won’t be able to open it from any other folder (it’s an Apple bug).

Here is a more complex example, you can see how there are some things that need fixing in the resulting iThoughts map. The linked text OR merged nodes is are shown as “notes” in iThoughts. It’s a small thing until you have MN maps that are full of these things. I keep the Notes pane open in iThoughts so when a select a node in that application I can see if there’s anything relevant in there.

My synthesis phase in MN involves preparing the map for export. This means ensuring that I have title ONLY and notes ONLY nodes. Any comments I try to bring up into the note frame. I tag them in ways that help with this as well. It has become such a ‘flow’ thing for me that I’ve forgotten all those little things, they are just automatic for me now so it’s hard to step back and remember the details!

Here is the MarginNote simple map:

And the slightly altered iThoughts map. Note that when you initially bring the map into iThoughts it has a node for the project as the centre node. I float the children (in iThoughts) so I can arrange them how I like. For example, the green node was a child of the project node (not shown) and I floated it to make it float again as it was in the MarginNote project.

Also take note of the comment in the red node, it has become a note for it in iThoughts (not visible unless you select the red node) 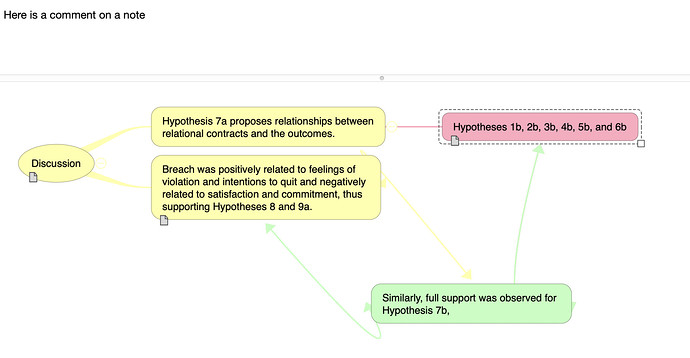 Again, if you have an specific questions or needs I’ll do my best to answer.

Wow! Thank you so much for the detail explanation. I appreciate you have taken your time to answer. It’s cristal clear now!

I would have one more question that is key for my workflow. Because of the nature of the subjects I study (engineering) there are plenty of diagrams and formulas that I excerpt using the ‘rectangular shape excerpt tool’. I use this tool to build nodes that are combination of 2 or more excerpts (e.g., formula + diagram) and keeping them together is a key aspect of my maps. I suppose I could still work around it… Are this type of excerpts exported correctly too?
Thanks,
Rafael.

I am about as far from engineering as I can possibly be, but here are two rectangular selections not OCR’d, exported from MN into iThoughts (the same project in the previous screens I’ve posted in this thread). Is this what you mean?

White (uncoloured) nodes come in grey, this I find mildly annoying and I don’t know if it’s iThoughts’ or MN’s fault). 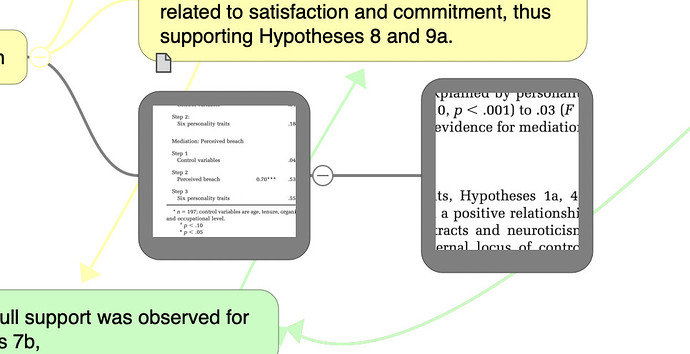 If I merge them into a single node then this is where a problem occurs, it treats the merged selection as a note (an image) but iThoughts doesn’t see it. It sees that there is a note but nothing is visible in the note pane.

Again, I’d prepare for this knowing of this behaviour and just use child nodes to show related items. 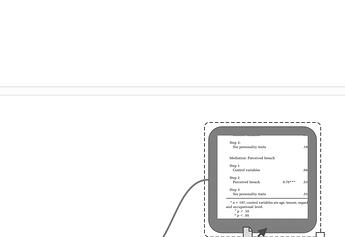 I tried grouping them so you can see how iThoughts handles groups. 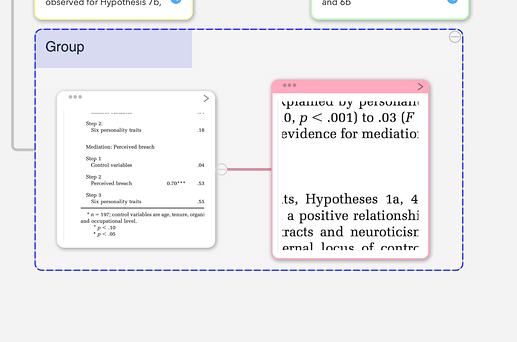 Here is the group in iThoughts

Thank you @happycatmachine – your illustrations and descriptions are very helpful.

This is great!
I am going to purchase the app, it is not 100% ideal for my workflow but now that I now these little ‘walk arounds’ I can see more pros than cons. I have been waiting for a big A1 sheet with all the nodes displayed the way I wanted

No worries @camgarciarafael and @quorm and thanks for the thanks.

Putting these together, as shoddy as they are, allowed me to take a closer look at how MN was behaving with iThoughts. As someone who uses these two apps close together rigorously I felt it might be a good exercise to learn how specific things are handled.

I normally don’t sweat the small issues and just see any hiccups as minor disturbances, I’m usually caring more about what I’m working on than the tool I’m using. My most recent project had over 1400 excerpts and has been a real beast to reign in. I’m still in the writing phase of that project and hope to be done with it in a couple of days.

Anyway, it is I who should thank you both for giving me the opportunity to do something that is not this nightmare project. My next project shall be better still for what I’ve learned about image notes from these examples. I normally just shy away from graphics or I draw them up in my own style (it helps with retention and understanding). Now I’ll see if I can work images in from my source material.

Enjoy and if you have anything to share about iThoughts and MN workflows please do. I’ve learned so much from seeing how others use these tools and I consider sharing my own experiences a bit of payback.

I am glad it worked both ways

It probably take me a bit until I get use to the new workflow but I will let you know my findings and experiences.
Regards,
Rafael.