Love the mindmap feature but it dominates the notetaking area, especially because you can only choose between vertical and horizontal map layouts. A “free” map layout where connections can be moved anywhere around the parent card would allow for a more flexible map organization. The extra space to draw around the card with PencilKit would be greatly appreciated!

Would you please upload some screenshots or videos describing it in detail? That way I can help you better. 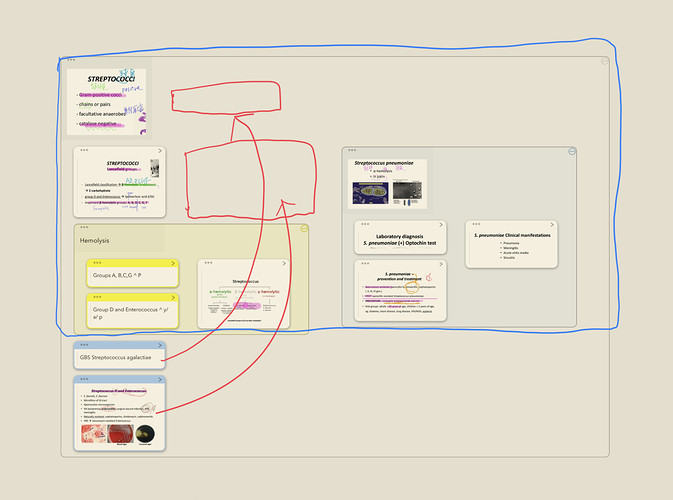 Can we change the mindmap layouts by ourselves ? (Instead of only vertical or horizontal , something Iike LiquidText)

By doing so, users can putting related experts together and at the same time minimize the mindmap( now there are to many blank spaces）

The free layout of the cards is not possible in the box branch, maybe you can try to create a child-map.

Love the mindmap feature but it dominates the notetaking area, especially because you can only choose between vertical and horizontal map layouts. A “free” map layout where connections can be moved anywhere around the parent card would allow for a more flexible map organization.

I feel your pain and for the first couple weeks of using MarginNote I had these very thoughts. Even the fact that Mind Maps by their very nature should be ‘free’ of constraints. I’ve also played extensively with LiquidText which does allow for such freedom.

Here is where I’ve found my thinking: I end up with so many nodes and links that being able to freely lay them out would quickly become more of a chore than useful. I found in LiquidText I was spending more time trying to get things to fit than actually doing research or useful note taking and that got in the way of productivity.

Even iThoughts, which bills itself as a mind mapping tool, allows for only limited freedom and I have come to understand there is a reason for this. Not only is there a reason, but I’m grateful I don’t have to think about things like the ‘job’ of putting things where I want them. Instead I can put them where they need to be.

In your example (one that I often fretted about early on) I now merge or make children those notes that need to be visually next to another. Failing that I make links which I still believe should be more clearly displayed. I know it’s a sacrifice but it’s the price I pay for a very highly organised mapping of excerpts from what might be many source documents.

Also, I’ve not used the pencil much because of this. I would love the integrate the pencil into my workflow but the fact that the structure is present I find it just quicker to drag things around and notate by typing so everything falls into place.

I’m not making excuses for this. I hope you don’t see it that way. I’d love for there to be a ‘free’ mode. I’d like to add that to my workflow and stay in MarginNote while doing so. I wouldn’t want to lose this structure though now that I’m accustomed to working with it. There are solutions like a “let it all hang out” option that lets you put anything anywhere and then a “clean it all up” option that pushes everything back into place.

Personally, I’d like a fourth MN mode (Document, Study, Review, and… Play?) where I can just throw my cards around with abandon

I’d like to add another example as to why a flexible mind map layout would be useful:

I made this mind map using an app called Scapple.

In this case I am not dealing with hierarchical knowledge and organising things by hand is part of the process of understanding what is a pretty dense argument. Having this type of mind map attached to the PDF that I’ve imported to MN and marked up in there using my iPad would be mega. The way you’ve implemented the pencil kit to write on the mind map would further lend itself to this - sometimes I get bored of typing and would like to add to the mind map by handwriting (sort of like OneNote can do). Sadly Scapple doesn’t have an iPad app, and OneNote doesn’t make linking text boxes visually easy and doesn’t work nearly as well for marking PDFs up and extracting excerpts from them as MN does.

I made this mind map using an app called Scapple.

What you’re fundamentally looking for is a “concept map” and while MarginNote doesn’t really allow this, to move from a hierarchical structure to one that is freer would require MarginNote to essentially add a new toolset. While having “one tool to do it all” is appealing, it usually also means something will have to be sacrificed, particularly with a 10 person team like MN has. I use a tool that is so useful that even if MN did suddenly offer free form maps I would very likely still use this tool rather than MN for concept maps.

But wait, one more thing. Once I excerpt everything I need from a collection of papers in MN, I take all those nodes out of (document) groups and I lay them out in a way that allows me to synthesise the information. When they are floating this is very similar to what you are asking for. It’s still a bit rigid but less so than when nodes are grouped. I then bring that into iThoughts and start laying things out there. But getting back to Scapple…

I used Scapple for years when doing concept mapping, I used iThoughts when doing mind mapping. Then I discovered that iThoughts has all of its amazing power of hierarchical structure that also works with concept maps. Really, hierarchies within concept maps is awesome. It’s on iPad and Mac and one can move between the two fluidly. It’s pretty insane actually just how useful it is.

This is a concept map I’ve just started for a project. I’m not using a strict “object/verb” mapping that a typical concept map uses but I could easily do that, each connecting line can have text on it like a good concept map should. 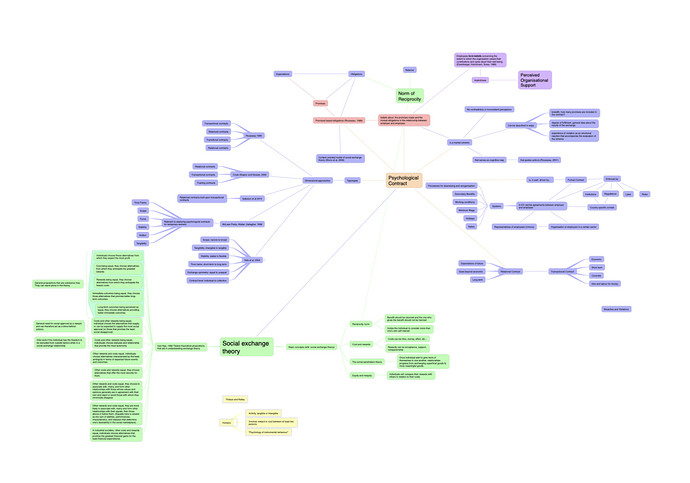 PS: I don’t know about pencil support in iThoughts. I should look into that and apologies for not doing so before writing this up.