Make it possible for a group to have child notes

I see it is possible for a note to have group node/frame as a child. It would improve the mind map a lot by also allowing a group node/frame to have child notes. Basically make groups act more like notes.
Please consider implementing this

Have you tried 【Summary】? This feature might help you.

That is not what I am after. I want to fully treat a group like a node. Only one summary can be placed and it can’t have child nodes.
I think adding this would benefit many users here. The mind map is the most important feature of your app, and adding ways of connecting the notes should be a big focus for you.

Together with the other popular feature request by another user of allowing one note to have two (or more) parent notes, this would make your app complete for mind map usage.

Hello, this looks like cards nested with cards, but makes it a little hard to understand the complex thinking that goes on here. In what scenarios would you like to use this type of organization? What kind of relationship do these cards belong to?

I’d love to understand your organization card logic, our current design for the mind-map is based on Tony Buzan-designed tree structure, which is easy for users to understand, and if we’re going to take your suggestions and explain them clearly in the tutorial, we need to understand what this kind of organization you propose means to you.

Hi, thank you for your response.

The screenshot above was just to illustrate one of the two features I am missing and was not an example or scenario of real use of mind map - the content of the notes was random.

To respond to the last first. I think users are more confused why these functions are not there. For example, when you can “engroup” a selection of notes, and make that group become a child of another note, why can’t that group also have a child note? It does not add more complexity or need to explain, but completes the system. But as I noted earlier, the “engroup” feature is maybe less used than the other thing me and others are requesting (Look at this recent thread: “Feature Request: A child note has two parent notes”), namely for a note to have multiple parents. I believe one of the first things new users are confused with or don’t understand once they learn the mind map system in MarginNote is why it is not possible for two notes to have a child note. So to sum up, I do not think it adds more complexity or need to explain for new users but fills a gap to make the mind map more intuitive and complete.

So in what scenarios would it be useful? For many scenarios. The notes that have child notes are often thoughts that builds on one another. Maybe a chain of causations, or just ideas that leads to other ideas. Sometimes a note in such relationship with other notes need to be further divided in to ideas or another chain of causation. Therefore it is useful to separate those note relationships from the rest of the note relationships by using the feature “engroup”. My suggestion makes it possible for that group of notes to stand in relation to other notes. It is already half way implemented in that a parent note can have a group of notes as child. Why not complete it in the other direction?
When it comes to two (or more) parent notes for a child note there are even more uses. Very often a note presents two alternatives processes. That means one note having two child notes. Often those two alternative processes produce one outcome, and it would be essential for those two child notes to together have one child note. There are many times one want to gather many separate thoughts in to one thought, so that it “comes together” and then continue the thoughts or elements of an argument from there.

While useful, the “link” feature does not solve this, and the “summary” feature unfortunately puts an end to the process/idea/argument chain in that direction, as it can not have child notes.

I understand that this might diverge from the strict mind map/brainstorm system. But I would argue most users don’t use it in that strict way. Most users use the mind map in MarginNote to connect complex thoughts, links of causation and arguments in academic books. And for that use, I believe most users would agree that these suggestions are essential to use MarginNote to its full potential.

I would ask you to at least consider making it possible for multiple notes to have one child note like others have requested before.

Hello, I‘m so glad to see your response.

Does the layout in this picture achieve the scene you envision? In my understanding, the standard mind-map is a tree-like structure, not to pay homage to a certain tradition, but to rely on this logic for the way we store information in our computers.

Marginnote currently supports export to ithought, which is ensured by the unified data storage logic of the mind-map. 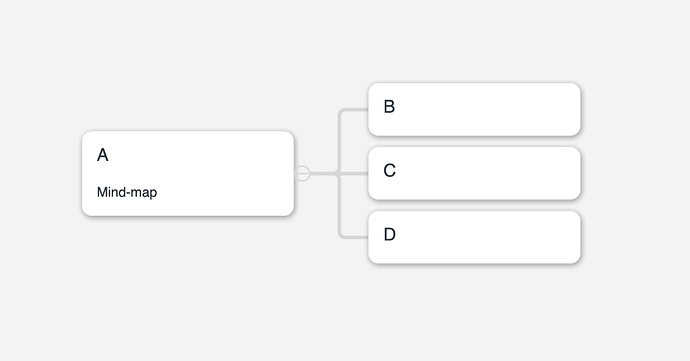 Honestly, I’m not denying the idea that a sub-card corresponds to multiple parent cards, people’s thinking is complex, and compared to a mind-map, a concept-map may be just another tool born to explain that complexity. 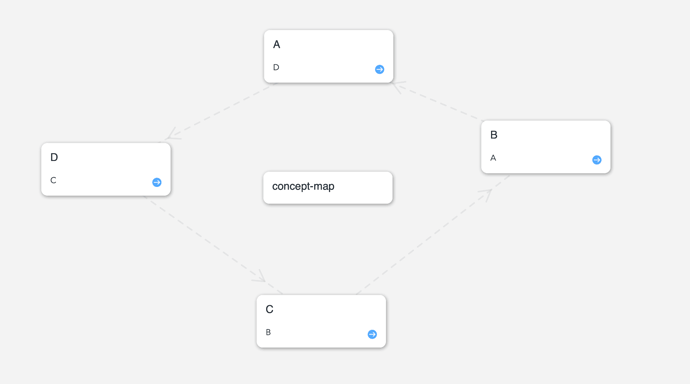 The difference between a 【concept-map】 and a 【mind-map】 is that there is no strict parent-child relationship in a concept-map, you can even make a closed-loop relationship if you want, I think the link function plus summary function may be helpful to you.

Thank you for reading my long response.
I understand that you want to keep the tree like structure to keep it similar to data storage logic. But I still think the benefit of allowing for two parent cards to have a child card would make up for the trouble of leaving the strict data storage similarity.
It seems clear to me that most users of MarginNote in practice actually use it more like a concept map than a mind map. This is because so many users excerpt/highlight text and use the map to make connections between the excerpted text.

Your suggestion is to use the “link” feature and the “summary” feature.

The “link” feature as it is now is not suitable because:

When it comes to the “summary” feature my main complaint is that it is hard to implement in the workflow of most users in MarginNote. This is because you can’t create a summary card directly from an excerpted text like you can with child notecards. Also, as mentioned, summaries can’t have a child note.

If you could make it easier to use the “link” feature it could be a very good alternative. For example making it so that you could automatically create a notecard and link connection when excerpting text like you can with child notes. If you also could make an option to make the hypertext associated with each linked notecard less visible/prominent, and make it possible to change the shape of the now straight lines - This could really make MarginNote reach it full potential as a study and research tool.

But I suspect it would be easier to just implement the ability for a child notecard to have two parent notecards.

Thank you for sharing your experience and advice.

In fact, the reason why the Summary function in Marginnote cannot have child nodes is because of technical problems in data storage and conversion.

In addition, if you have used Xmind you will understand that the summarization feature in Xmind allows for child nodes, which also leads to two problems.

I’ve documented and fed back your suggestions for improvements to the linking feature, and hope it will help you by optimizing the display and efficiency of the link function.

Thank you so much for taking the time for this correspondence. And thank you for bringing my concerns and suggestions about the linking feature to consideration for the developers.

MarginNote is an amazing tool, but making it a bit more flexible in how you arrange your mind map would take it to a whole new level. I think focusing more on the linking feature is a good compromise for the issues you mention. It could actually make it possible to combine the best of mind maps with the best of concept maps.

https://youtu.be/_DT_Un3M06o
Please take a look at this video showing the usage of some of the features I’m talking about in the app Tinderbox. I hope that could give you some idea of what I’m suggesting and some inspiration on the possibilites of MarginNote.

Wow, did you record this video? Thank you for sharing the link.

I very much agree with some of the knowledge management ideas and mindsets embodied in the Zetelkasten Notes Method, and correspondingly, Marginnote’s basic unit of notes is designed as cards. We will be exploring more in this direction in the future regarding the concept of the Card Note Method.

In addition, I have personally used Tinderbox for some time now, and its features and formatting are a bit more complex than some normal concept-map tools. Tinderbox pioneered the design of internal views of cards, where the user can store and organize other cards, just as each card in Marginnote can be stored and organized as a notebook（just a simile, it’s not supported by MN ）. tinderbox is a design that I don’t have a clue about the logic behind, and the value and meaning behind its counterpart.

I did not record the video, and have not yet bought Tinderbox, but I very much like the possibilities it has for visual learning and research combined with the Zettelkasten method. Tinderbox is very deep and complex, and the concept mapping is only a small part of it.
My hope is only that MarginNote would include something resembling the visual “linking” features in Tinderbox (or other concept map tools out there). Of course it would have to be simpler, but still it could be done so as to allow users to manipulate the linkages between notecards more.
As I said - That would be a dream come true for visual learners.

Here is just an example of a simple way you could quite easily implement all of this:

The first (1) should be very easy to fix

Thanks to your patience, these screenshots give me a better understanding of the actual dilemma behind the requirements, and I’ll be pushing for developers to optimize the link function.

Another way is to allow the child to attach on side or bottom
This way - box ‘titles’ can be linear - Eg go to the right with each as a child, but then have each numbered box have its own children … ?

@TheeeDragon Great idea! This would be another brilliant feature that would create more flexibility and possibilities when using the mind map. I hope the developers take a look at this. @Edward_Support-Team