I’m tired of waiting for fixes to simple, stupid problems with MarginNote, and I’m really tired of broken promises from the support staff.

Please share your ideas about other applications for PDF annotation.

I’m really tired of broken promises from the support staff.

I feel ya. I’ve removed MarginNote from my workflow and looking for alternatives too. So far LiquidText and Highlights seems promising to me.

What’s going on? Is there anything I can do to help?

Mobo, I actually came to contact you, we have a team member @Joe_Support-Team who has a lot of knowledge about Japan, he and his friends have just finished the Japanese version of MarginNote, and we made the DMG and Testflight, I would like to ask for your opinion and see if there is anything that needs to be further improved and modified!

I’m so sorry and remorseful that I’ve just logged on and realized that the Team haven’t processed the recent comment posts from your esteemed core community members. This thread was not effectively implemented from the bug floor onwards, we will follow up and correct it immediately! 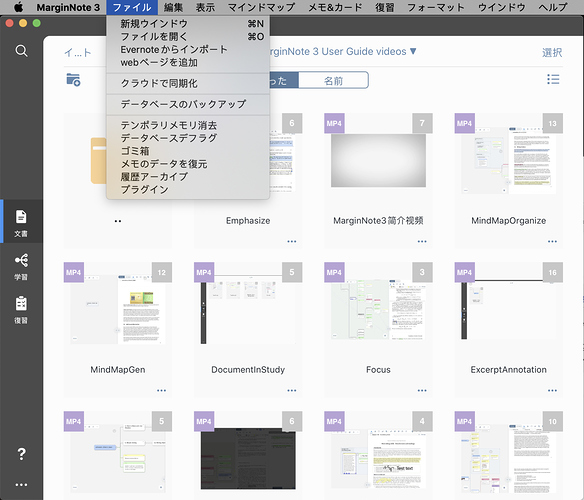 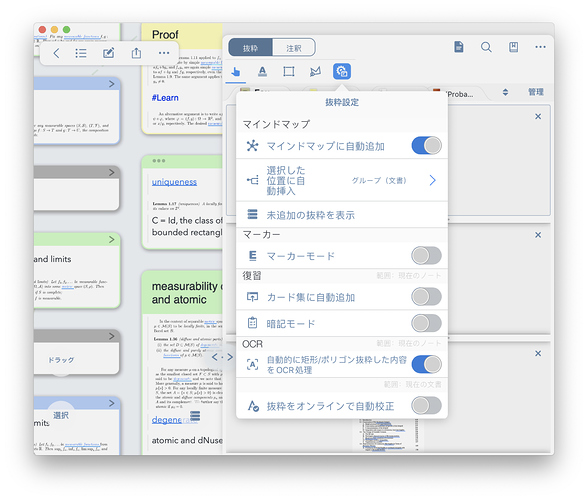 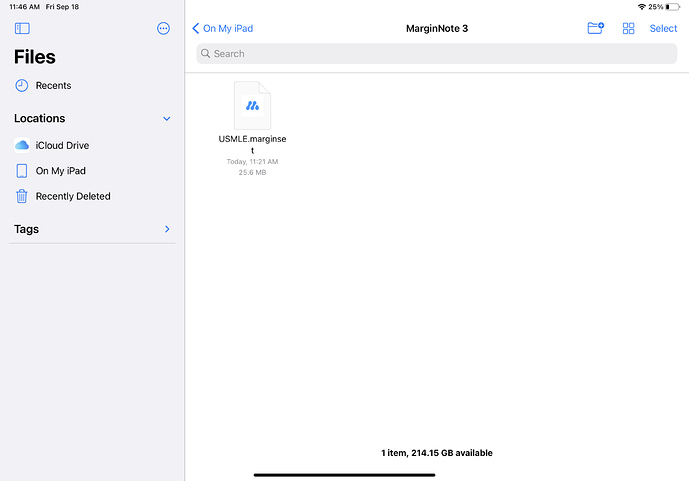 IMG_FDE3E5E57AC8-12388×1668 212 KB
We are working on a new software based on the latest features of IOS14, with Pencilkit natural gesture scribbling, improved note data structure, system files integration and sidebar, we are calling it marginsketch.

We are also trying to improve some of the problems with MarginNote by refactoring MarginNote 4, the old framework and data structure makes some changes difficult to make, we will try our best to fix the existing shortcomings of MarginNote 3 as much as the framework allows, including sync, file management, tagging and filtering, etc.Really sorry about that!

[IMG_FDE3E5E57AC8-1] Lack of communication is indeed an issue for us, and we’ve actually completed the experiments with the data structure revamp you suggest, redefining *.marginset as a packet can solve errors and a host of potential failures caused by separate management of files and notebooks, and can be helpful in resolving synchronization issues. The list of importance that you have compiled is on the wall in our office and we have never given up on fixing these issues. the lack of const…

What’s going on? Is there anything I can do to help?

Do you plan to fix these issues? When? I.e., in which release(s) of MarginNote?

As for the Japanese language version — sorry, no.

Hi mobo, I’m really sorry that we’ve been having serious problems with our support system for the last while. We have just finished the Japaneseization of marginnote 3 and would sincerely appreciate your help in testing and completing the Japanese version together, your advice is really important for us.

Font > Italic is different from Right click menu > Emphasis [image] [image] We did update your request to set the underlining feature to italics, but I realize that what you are following up on is something else, a bug in the font settings, it is not the underlining feature that we are talking about, I have misunderstood, this is obviously a simple bug and we can fix this immediately in the next version! I didn’t understand the situation before. I thought it was resolved.

[IMG_FDE3E5E57AC8-1] Lack of communication is indeed an issue for us, and we’ve actually completed the experiments with the data structure revamp you suggest, redefining *.marginset as a packet can solve errors and a host of potential failures caused by separate management of files and notebooks, and can be helpful in resolving synchronization issues. The list of importance that you have compiled is on the wall in our office and we have never given up on fixing these issues. the lack of const…

Contribute to MarginNote/Addon development by creating an account on GitHub.

All your notes can be converted based on the MN plugin. We’ve been working on the instructions for these interfaces for the last few months, and have almost completed the main documentation, which we are now working on proofreading and translating into English for the community of developers. You will then have a high degree of data customization to suit the needs of different format conversions. The following is the Chinese version of the beta test, if interested, you can check through the c…

Fixing hyphenated text is a simple problem, we’ve already discussed it, I was the one who complicated it before, I thought you were going to batch convert and remove hyphens from all the old notes in the past, that would require a plugin to do the data conversion via API. We can just improve the excerpt to do that, and automatically remove the hyphen at the end of the excerpt.

We’re not asking you to be involved in the proofreading of the Japanese localization, in fact we’ve done many, many proofreadings based on our Japanese background friends in Shanghai.

It’s not a marketing plan, but a coincidence that during a tutorial recording, we found out that the friends who helped us are from Japanese background.

I thought you would be happy to know this, so I’m showing it to you, if you have any comments we will improve it, you don’t have to see it as a job, please be patient and wait until all the above you mentioned issues have been solved, and then come back to see our Japanese version, it just so happens that a member of our team will be working in Tokyo soon, if there is a chance, we look forward to visiting you in Tokyo!

LiquidText is the only alternative that offers comparable features with regard to the study mode and mapping approaches. It suffers from its own problems. For example, at least MarginNote correctly imports annotations from other markup apps (LiquidText can fail to do so).

When you need only annotation support to markup PDFs, try any one of the number of annotation apps instead. The overhead and instabilities that are within MarginNote and LiquidText are not worth having just to annotate documents. I personally prefer PDFExpert.

Thanks, @xurc and @DrJJWMac, for sharing your experiences. I tried Highlights two years ago, but it didn’t seem very solid. Probably, I should check it again. I haven’t looked yet at LiquidText but that was on the top of my list. I’ve also tried PDFExpert and they seem to have fantastic support, but the annotation features didn’t seem really geared to academic use. Maybe I need to dig deeper?

I’ve also tried PDFExpert and they seem to have fantastic support, but the annotation features didn’t seem really geared to academic use.

From my experience, the customer support of PDF Expert is pretty good, but I agree that it’s not designed for academic use. I mostly use it on my Mac to edit PDFs and it’s very powerful at that, but I need another tool to read them.

@Lanco_Support-Team, thanks for your detailed responses.

(1) I will wait for the fix to italic support. To be clear, I’m wondering about italic support in the desktop version of MarginNote. It shows italics when I change emphasis from the menu, but it doesn’t stick (see image, below). This was supposedly fixed, but it’s still broken. You say: should be fixed in the “next version” — this means 3.6.16, or…? 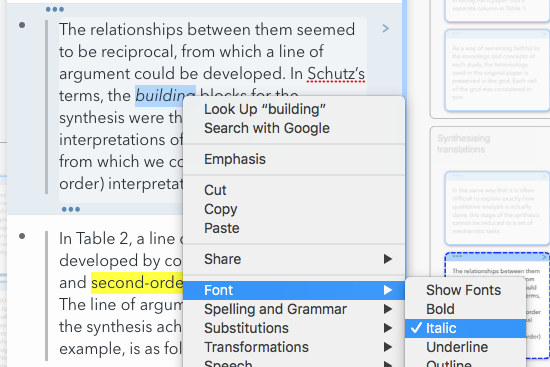 (2) Regarding the API documentation for MarginNote addons, I don’t understand the target you mention. You say it’s “already” released, but “translating soon”…? What is your target release date?

FWIW, I also have 20+ years of experience working on API documentation and I know that this is the easiest form of technical writing. Please understand: I’m not trying to boast here. My point is just that I know what this work actually involves — it’s simply not hard for a competent technical writer —, and so I would appreciate a specific target date from you.

(3) Regarding the problem with hyphens: batch conversion is only a hack, not a real solution. MarginNote can and should handle this internally. I have already made several suggestions about how to do this using external scripts, but there still needs to be some integration with MN. If you feel that using the new API is the best way, that seems fine by me — as long as I don’t have to read your API documentation and write my own JavaScript to do it. Again, this should be something that MarginNote handles itself, either in the app or with a simple addon. You mentioned “next version” for this support — so does this mean 3.6.16, or…?

(4) Regarding MN folders and categories, @jprint has given you lots of good feedback. Basically, I agree with his concerns and general list of items to address. He’s given this a lot of thought and taken time to spell out the issues, so I feel that he (and I, and @JournoProf, and other users) would appreciate a more detailed response to his query in that thread.

That is: which specific features on the list by @jprint are you considering for 4.0? What general time frame do you anticipate for the release? E.g., within 3 months? 6 or 9 months? Could some of the issues be addressed sooner? How are you prioritizing these issues?

To avoid a repeat of the communication problems over the past few months, I think it would help if you could be specific about dates.

(5) Regarding the Japanese version, yes, I would be willing to look a little, but after some of these long-outstanding issues have been resolved.

As I see it, the core functionality of MarginNote is what needs the most attention. I have mentioned the main issues that I see — mostly they are small things —, and @jprint has offered an even better list. The localization of the app (e.g., to Japanese) doesn’t really matter to me if the core functionality is lacking and never gets fixed.

Hi, I’m on weekend vacation, I’ll check back with the developer first thing Monday morning and then post a more detailed Roadmap on Monday!

but the annotation features didn’t seem really geared to academic use.

When by academic use you mean having the ability to annotate, collect, arrange, and comment on all in one app, the only choices are MarginNote and LiquidText AFAIK. Otherwise you have to export after you annotate.

These are all excellent suggestions, I hope they are followed up on since I find myself looking at alternatives for these reasons as well.